On this day in history, in 1996, Equal Pay Day was established by the National Committee on Pay Equity (NCPE) as a public awareness event to illustrate the gap between men's and women's wages. 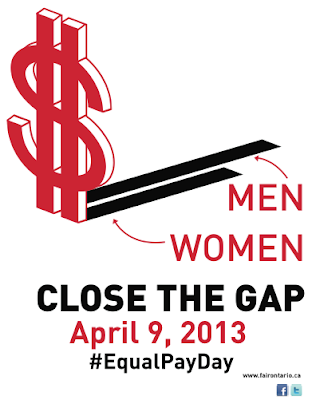 - Artist Paul Kane arrived at Fort Victoria in 1847, recording the area's First Nations and their customs through sketches and writings.
- Premier Daniel Johnson of Quebec was born in Ste-Anne-de-Danville, Quebec in 1915
- Then Easter Monday, in 1917, four Canadian divisions and one British brigade captured Vimy Ridge, near Arras, France, with a loss of 3578 killed and 7000 wounded.
- Richard Hatfield, longest-serving premier of New Brunswick, was born in Woodstock, New Brunswick in 1931
- The Auyuittuq National Park Reserve was formally established in 1976
- Steve Stavro paid $23 million to Harold Ballard Charities as partial payment for Maple Leaf Gardens in 1995. The overall cost was $167 million.
- Samuel R. Percy patented dried milk in 1872
- Marian Anderson sang before 75,000 at the Lincoln Memorial in 1939
- Martin Luther King Jr. was buried in Atlanta in 1968
- Paul McCartney announced the official split of The Beatles in 1970
- Consort of George VI, and mother of Queen Elizabeth II, the "Queen Mother" Queen Elizabeth's funeral was held at Westminster Abbey in 2002
- "The Lion King" became the highest grossing Broadway show, overtaking "The Phantom of the Opera" in 2012

Stay tuned for our next, "On This Day in History"!
Posted by Sylvan Lake Municipal Library at 8:55 PM