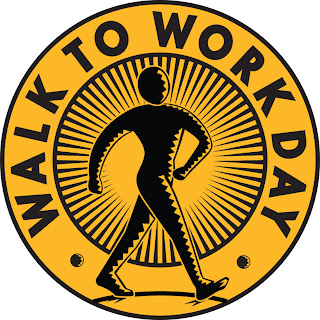 I walked to work today (sure, I only live a block away), did you? Get out there and get moving!

- St. Patrick returned to Ireland as a missionary bishop in 456
- The Mayflower sailed from Plymouth on a return trip to England in 1621
- Isaac Quintard patented apple cider in 1806
- An Act of the Canadian Parliament created the Supreme Court of Canada in 1875. The court sat for the first time on January 17, 1876.
- Anne Sullivan taught "water" to Helen Keller in 1887
- Sherlock Holmes's "Adventure of Empty House" began in 1894
- Sherlock Holmes's "Adventure of 3 Students" began in 1895
- 1st modern Olympic Games officially opened in Athens in 1896
- British Columbia women (excepting Asians and Aboriginals) won the rights to vote and to hold provincial office in 1917. The Dominion Elections act, which made race a ground for exclusion from federal vote, wasn't repealed until 1948.
- Writer Guy Vanderhaeghe, whose novel The Englishman's Boy won the Governor General's Literary Award for fiction, was born at Esterhazy, Saskatchewan in 1951
- Elvis Presley recorded his debut single, "That's All Right" in 1954
- Winston Churchill resigned as British Prime Minister in 1955
- Gentilly nuclear power plant opened in Québec in 1971, the world's first nuclear plant with a reactor fuelled by natural uranium and cooled by ordinary water (the CANDU system).
- Also in 1971, Fran Phipps became the first woman to reach the North Pole
- Paul Newman won a court victory over Julius Gold, to keep giving all profits from Newman foods to charity in 1990
- Construction began on Cleveland's Rock & Roll Hal of Fame in 1993
- Mark Chahal killed 10 people in Vernon, BC. in 1996
- International Internet group "Anonymous" hacked several Chinese bureaus in opposition to censorship in 2012
- And finally, for the Trekkies out there, Earth first made contact with the extra-terrestrial Vulcan species in 2063

Stay tuned for our next, "On This Day in History"!
Posted by Sylvan Lake Municipal Library at 10:56 AM