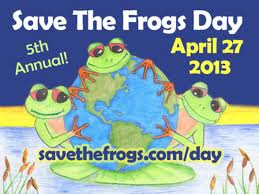 In an effort to raise awareness of the plight of amphibians, the scientific community has declared Saturday, April 27th the 5th annual Save the Frogs Day. This global event encourages the appreciation and celebration of amphibians by people from all over the world.

Only a small portion of our public is aware that frogs are disappearing. Amphibian conservation efforts will not be successful with an uninformed public. The goal is to make the amphibian extinction crisis common knowledge. 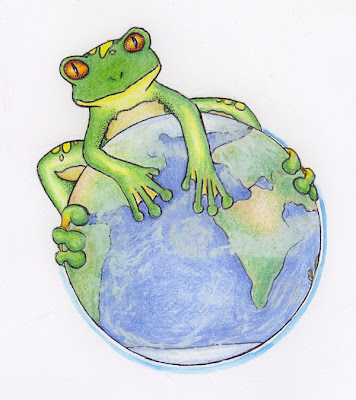 "When we save the frogs, we're protecting all our wildlife, all our ecosystems and all humans." - Dr. Kerry Krifer, Founder & Executive Director of "SAVE THE FROGS!"

Join "SAVE THE FROGS!" here: http://www.savethefrogs.com/members/index.html

- David I became King of Scots in 1124
- In 1628, Samuel de Champlain recorded in his journal that, for the first time in New France, land had been “broken by the plough drawn by oxen,” a task typically carried out by human strength.
- Beethoven composed his famous piano piece, Für Elise in 1810.
- An American force of 1700 men captured York (Toronto), looted the town and burned down the Parliament building in 1813.
- Myfanwy Spencer Pavelic, first Canadian-born artist to have a painting accepted in permanent collection of the British National Portrait Gallery, was born in Victoria in 1916.
- Michael Kusugak, an Inuit children's writer, was born in Repulse Bay, NWT in 1948.
- Pianist Louis Lortie, one of his generation's outstanding musicians, was born in Montréal in 1959.
- NASA launched Explorer 11 into Earth orbit to study gamma rays in 1961
- Pan Am 707 crashed into the mountains of Bali, killing 107 in 1974
- Over 70 inches of snow fell on Red Lake Montana in 1984
- Beijing students took over Tiananmen Square in China in 1989
- Betty Boothroyd became the first woman to be elected Speaker of the British House of Commons in its 700-year history in 1992
- Construction began on the Freedom Tower for the new World Trade Center in New York City in 2006

Stay tuned for our next, "On This Day in History"!
Posted by Sylvan Lake Municipal Library at 9:54 PM