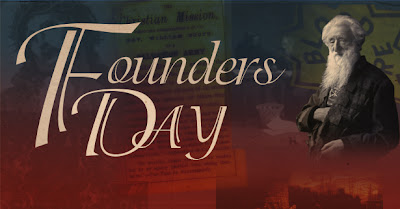 On this day in history, Salvation Army Founder William Booth was born. In 1865, Booth, a London minister, gave up the comfort of his pulpit and decided to take his message into the streets where it would reach "the poor, the homeless, the hungry, and the destitute". Booth recognized the everyday needs of the people, and since the time he established the Salvation Army, their services now include hospitals, shelters, nurseries, and well-priced thrift stores to help the less fortunate.

This Founder's Day is celebrated on William Booth's birthday, in remembrance of his creation of an organization which continues to aid the suffering today.

- Painter Joseph Légaré was born in Québec City in 1795
- Julia Hart, who wrote the first work of fiction by a native-born Canadian to be published in Canada, was born in Fredericton in 1796
- The political newspaper Le Vrai Canadien was founded by Jonathan Sewell and Pierre-Amable De Bonne in 1810
- Priest and naturalist Léon Provancher was born in the parish of Bécancour, Québec in 1820
- The Safety Pin was patented by Walter Hunt in 1849
- The ASPCA officially formed in 1866
- The first legislative council of Manitoba sat for the first time in 1871
- Alexander Graham Bell spoke the first words ever heard on the telephone when working on the device in his attic room in Boston, Mass. in 1876; he made the first call from one building to another at Mt. Pleasant, Ontario, on Aug 3 when he called his uncle at Brantford.
- The first human cannonball act was performed in London in 1877
- Avril Kim Campbell, Canada's first female Prime Minister, was born in Port Alberni, BC in 1947
- Workers of Gaspé Copper Mines in Murdochville, Québec, went on strike for the right to unionize in 1957. The conflict lasted 7 months.
- In 1986, Minister of Communications Marcel Masse created a Public Lending Right program under the administration of the Canada Council, to compensate writers for the use of their books in public libraries.

Stay tuned for our next, "On This Day in History"!
Posted by Sylvan Lake Municipal Library at 10:14 PM