As Library Week continues, today is National Bookmobile Day! Join us to celebrate bookmobiles and the dedicated library professionals who provide this valuable and essential service to their communities every day. 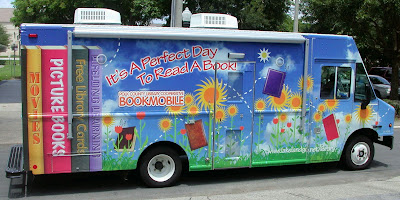 Held on the Wednesday of National Library Week since 2010, National Bookmobile Day is designed to recognize and celebrate the role of bookmobiles and direct-delivery outreach services in fulfilling the mission of libraries. Bookmobiles deliver information, technology, and resources for lifelong learning for everyone! 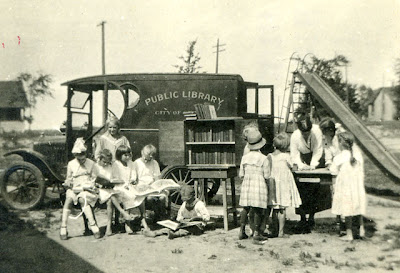 Modern bookmobile service is believed to have its roots in the late 19th century, and can still be found in a wide variety of countries today.

Today is also Bat Appreciation Day, National Haiku Poetry Day (It's still Poetry Month, after all!), Ford Mustang Day, and Nothing Like a Dame Day!

- Benedict III ended his reign as Catholic Pope in 858
- Christopher Columbus signed a contract with Spain to find Indies in 1492
- Marguerite Bourgeoys, founder of the Congrégation de Notre-Dame de Montréal, was born in Troyes, France in 1620.
- Weakened by disease and cultural interference by the French, the Huron Nation was finally destroyed by the Iroquois in 1649. On Easter Day 1649, the last Huron band left Gahoendoe for the mainland and were either killed or assimilated into Iroquois tribes.
- Canada's foremost field naturalist, John Macoun, was born in Maralin, Ireland in 1831.
- The clipper Marco Polo was launched from Saint John, New Brunswick in 1851. It was the fastest ship in the world in its day, setting records on the run from Liverpool to Australia.
- Charlottetown, PEI, was incorporated as a city in 1855.
- The Barr colonists arrived in Saskatoon in 1903, where they spent 2 weeks reorganizing before embarking on a wagon trip to the Barr colony on the Alberta border.
- New Brunswick women won the right to vote in 1919, though the right to hold provincial office was still not attained.
- Emperor Haile Selassie of Ethiopia ended slavery in 1932
- Jackie Robinson bunted for his 1st major league hit in 1947
- Prime Minister Pearson announced the creation of the Order of Canada in 1967, effective July 1st.
- The 1st Boston Women's Marathon was won by Nina Kuscsik of New York 1972.
- The Canadian Charter of Rights and Freedoms came into effect in 1982. The Charter guarantees all Canadians fundamental rights, democratic rights, mobility rights, legal rights, equality rights, and linguistic rights.
- Also in 1982, Queen Elizabeth II proclaimed the new Constitution Act on Parliament Hill.
- In a ceremony on Parliament Hill in 1983, Queen Elizabeth signed Canada's patriated constitution.
- The 1st National Coin Week began in 1983

Stay tuned for our next, "On This Day in History"!

Posted by Sylvan Lake Municipal Library at 10:02 AM